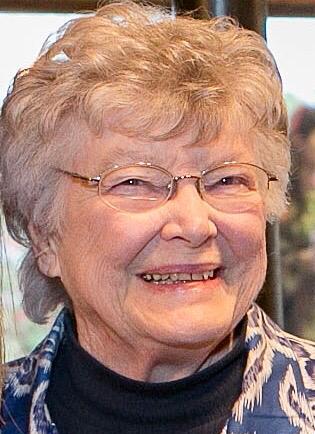 Marjorie “Marge” (Klotzbaugh) Nachman of Fairview, PA and East Springfield, PA passed away Wednesday, July 29, 2020 at her home.  Marge was born on April 19, 1929 in New Castle, PA to the late George and Freda (Smith) Klotzbaugh.  She lived with her family in various cities as a child but eventually settled in Girard, PA.  Marge graduated from Rice Avenue Union High School in 1947.  While in school she was involved in many activities; Class treasurer, newspaper editor, chorus, library club, cheerleading and girls reserve.

A few years after high school she married the love of her life, Nick Nachman on April 22, 1950.  They bought a house and began their life together in East Springfield, PA opening the Nachman’s Red & White grocery store which they ran until Nick became postmaster.  Marge and Nick were married until his passing in 1995.  Marge and Nick loved to play golf, play bridge and travel.  In later years, they volunteered delivering Meals on Wheels.  Marge worked as an LPN at Pleasant Ridge Manor for 24 years.  After retiring from Pleasant Ridge, she worked doing home health care.

Marge was very artistic.  She loved to draw and paint.  She was an avid reader and was diligent in writing in her journal every day.  She never missed working on her crossword puzzles or watching Jeopardy every night.  Her two favorite snacks were M&M chocolate chip cookies and ice cream drumsticks.  She loved watching movies, especially anything with Ryan Gosling.

Marge is survived by her children, Cheryl Nachman of Girard, PA, Rosemary (Al) Penedo of Southlake, TX; her grandchildren, Christopher Nachman, Andrea Penedo and her husband Matt Parks and Elena Penedo; her sister Freda Royed; her sister-in-law, Anna Hamady and brother-sister-in-law, Cap and Marge Griffey as well as many beloved nieces and nephews.

Friends are invited to call at the Jean Evans Thompson Funeral Home, 11883 Main Street, East Springfield, Pa 16417 on Monday, August 3, from 3 to 7 p.m. The family wishes to keep the safety of family and friends as top priority so funeral services will be held privately.  Marge will be laid to rest with her husband, Nick at St. Joseph Cemetery in Conneaut, OH.

In lieu of Flowers, the family respectfully requests that donations be made to Marge's favorite organization which is the Best Friends in Utah.  (See Below)

To order memorial trees or send flowers to the family in memory of Marge Nachman, please visit our flower store.